Veteran Metropolitan designer Janet Hesselschwerdt worked with her longtime client, Nina Seed, to design a unique kitchen that didn’t sacrifice on design in order to create ample storage.  Nina wanted to create a pantry for her latest kitchen, but knew she wanted it to be sleek and contemporary – which are not words always associated with a kitchen pantry. The solution – make it hidden!

In the U.K., Nina had seen paneling used as “hidden walls” – walls that concealed powder bathrooms and even secret rooms via a moving bookcase – and wanted to apply this concept for a kitchen pantry. Nina says she, “took a clever and centuries-old idea from a rather grand English country house and applied it to the modern day kitchen,” and Janet was able to help Nina make her idea come to life. 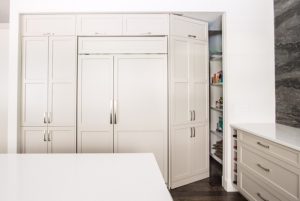 Nina wanted the cabinets to have a muted, furniture feel that would not obviously stand out in the room and had all the appliances are paneled, as well. She said this was inspired by the English country house kitchen, where cabinets are often understated, never white, and there is little-to-no upper cabinetry.

An added bonus for families, the totally concealed pantry makes for a great hiding place for the children! 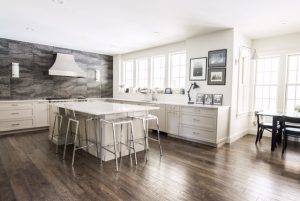